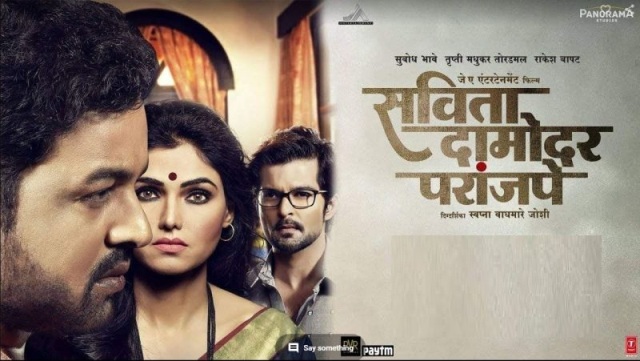 Director – Swapna Waghmare Joshi
Star cast – Subodh Bhave, Trupti Toradmal, Raqesh Vashisth
Producer  – John Abraham
Writers– Shirish Latkar (dialogue), and Shirish Latkar (screenplay)
Music -Nilesh Moharirand Amit Raj Sawant
Cinematography – Prasad Bhende
Editor – Kshitija Khandagale
Costume Design – Malvika Bajaj
Release Date – 31st Aug 2018
Synopsis: When the M Town film Savita Damodar Paranjpe was announced in the media it turned an instant hit and made several headlines.The film is directed by Swapna Waghmare Joshi and it has the star cast Subodh Bhave, Trupti Toradmal, and Raqesh Vashisth who would be seen in the key roles in it. The film as said is produced under the banner of the popular B Town actor, which is all set to be released on 31st August 2018 and the writers of the film include Shirish Latkar (dialogue), and Shirish Latkar (screenplay).  The Music is composed by Nilesh Moharir and Amit Raj Sawant, while the Cinematography is carried out by Prasad Bhende and the Editor of the film is Kshitija Khandagale.
Talking about the other department the film’s editing is carried out by Kshitija Khandagale and the Costume Design is carried out by Malvika Bajaj who has taken care of the Makeup Department.  The makeup artist Production Management is carried out by Vinod Sarode and  production manager art department was headed by Rahul Tulaskar whereas the Music Department is carried out by Santosh Phutane. Now, talking about the film, it revolves around the life of a married couple who goes on a roller coaster ride after 8 years of their marriage as some bitter facts of their life comes out to light. As you check the film you will understand that it is a psychological thriller, which is based on true events.
The makers have just now released the trailer and the film is gaining a good buzz in the media. So, what do you have to say about the same, do let us know, you can get a good idea about the same while catching up the trailer as well. Do stay tuned with us to know more about this film and others only with us. Do comment about the film and others.