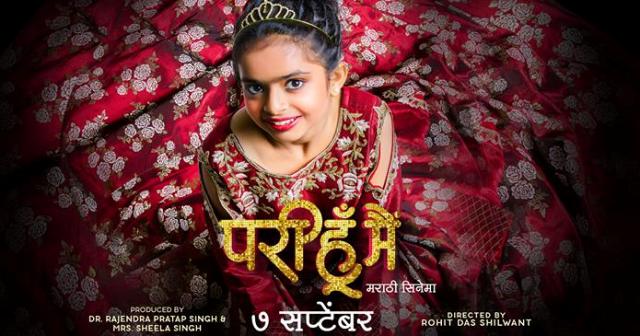 Director – Rohit Shilwat
Star Cast – Shruti Nigade, Nandu Madhav, Devika Daftardar and Flora Saini
Genre – Drama
Production Studio – Yogayatan Group production
Music – Samir Saptiksa
Editor – Nitesh Rathod
Release Date – 7th September 2018
Synopsis: The M Town has always one movie to the other to release and one of it is Pari Hoon Main, while it is directed by Rohit Shilwat. The star cast include Shruti Nigade, Nandu Madhav, Devika Daftardar and Flora Saini who would be seen in the lead roles. The film happens to be a drama genre one, while the music is given by Samir Saptiksa and the editor of the film is Nitesh Rathod. The movie is releasing on 7th September 2018. The film is produced under the banner of Yogayatan Group production, which happens to be a known group in M Town.
The film talks about the modern day child labor wherein parents want their kids to perform on stages and catch eye balls. It showcases how a child has to face a lot of pain and rejection while facing the judges and the crowd to become a star. It hampers their childness and many more things that are usually seen in the childhood. As per reports, the film has made like a B Town film wherein every single sequence is shot keeping one music or the other. This will give a new feel and appeal about the film to the audience. The cast and the crew are really excited to see the film releasing soon. And there are much more to reveal in the media.
The makers have released the trailer along with the posters that have helped to create a good amount of buzz in the medial. What more to think is interesting to find out about the film. Do stay tuned to know more about this movie and others in M Town and yes do not forget to share your views and ideas with us before you start talking about others. So, what do you feel, do keep on sharing your ideas and comments about the film.