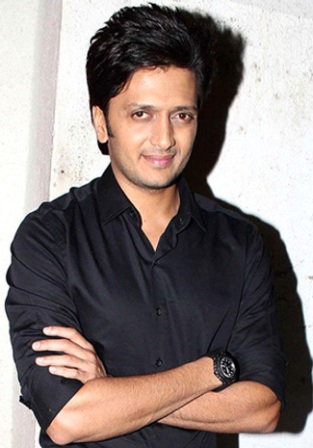 Belonging to a politically influential family in the state of Maharashtra , Ritheish had an easy access to Bollywood. His debut film Tujhe Meri Kasam released in 2003. Later he played comic roles one after the other starting with Masti. In Masti, Rithiesh , Vivek Oberoi and Aftaab Shivdaasani played the married trio who lust after other women. The film was a terrific sex comedy which earned heavy returns at the box office. Ritheish performance was noted to be wonderfully delighting even in comparison with other actors who too were brilliant at comedy. Ritheish’s career took shape thereafter and he got popular with another sex comedy Kya Cool Hain Hum. In Kya Cool Hain Hum, he teamed up with Tushar Kapoor as two friends. Ritheish played the horny guy who finally finds his true love in the end. Before he got typecast as a sex comedy actor he played the role of Bobby Deol’s younger brother in Bardasht. The crime thriller gave him an opportunity to play a significant role . He was appreciated for his subtle acting. Later similar roles came his way which did not make any significant difference to his career. Ritheish was more than often written off as a flop star. Though he never assumed the hero status, he was appreciated as for natural acting abilities.

When Sajid Khan made his debut in direction Riteish once again starred with other actors like Ashay Kumar and Fardeen Khan in Hey Baby which was once again a sex comedy. There was a subtle style to his acting that would evoke laughter. Later he was once again cast in House full by the same director and played love interest of Lara Dutta. In the sequel of the same he repeated a similar role with Jaquelne Fernadez.

In 2012, the son of ex chief minister of Maharashtra, Riteish , tied the knot with his first co star Genelia D Souza with whom he paired successfully in Masti and Tere Naal Pyar Hogya. Just before the two got married , Tere Naal Pyar Hogya released but got a lukewarm response. It was with 2014 released Villain that Rithiesh got his due for his acting abilities. The film is a benchmark performance for his career.

Riteish recently ventured into film production in Marathi. His film Yellow received much critical appreciation and many awards. Later Balak Palak, the educative film also brought him success. In 2014, Lai Bhari turned a trump card for him. He played a double role in the movie that became the highest grossing film in Marathi ever. It was a big success for Riteish the actor and the producer. In November , Rithiesh and Genelia were blessed with a baby boy.