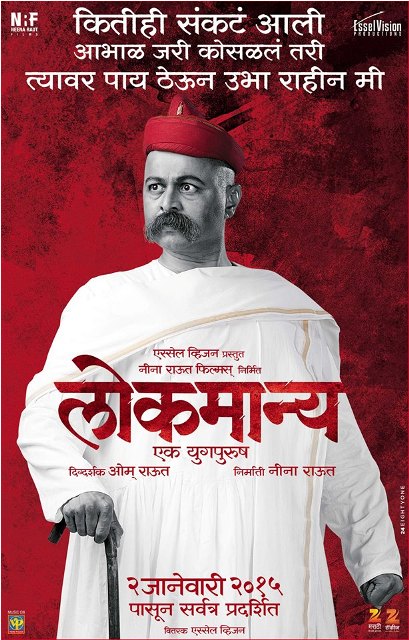 Lokmanya – Ek Yugpurush has been received warmly by audiences in Maharashtra. With celebrated actor Subhodh Bhave playing the lead role of freedom fighter Lokmanya Tilak , the film is gaining huge popularity. It received a good response on its opening day. With no big release in Hindi this week, Lokmanya Ek Yugpurush attracted Marathi movie lovers to this film which is a sincere bio pic on the life of one of the greatest leaders in India. It competes with Aamir Khan and Anushka Sharma starrer super hit film PK which is in its third week now.

On the first day of its release, Lokmanya occupied 20% screens in Mahashtra . This is the highest opening amount for the month for Marathi films. With favorable reviews and word of mouth , the film recorded improved collection on the following days. The occupancy for the film has been high which is around 60 % in theatres all over the state. Subhodh Bhave, who has played historic characters before this, is an award winning actor. Thanks to his fan following, the film’s response has been terrific and is expected to increase after the weekends as well. The total collection of the film at the end of the week is above 2 Crore With PK running successfully across the country, it remains to be seen how the audiences will receive the historic biopic in days to come.

Recently Chief Minister Devendra Fadnavis praised Lokmanya Ek Yugpurush in his statements. With such favourable comments, the film is all set to attract audience.