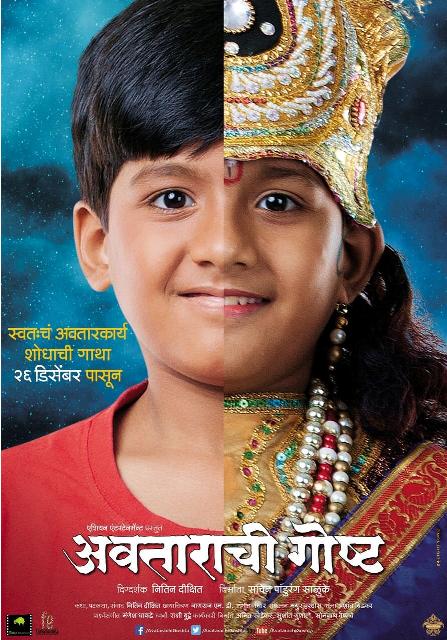 Avatarachi Gosht is the story of a young boy and his best friend. They both indulgence in an innocent game which eventually leads to a thrilling climax.

Kaustubh , a young boy is fascinated by the stories by his grandmother. He intently listens to the stories of the legendary heroes in mythology like lord Krishna and Rama who performed miracles. One day when he comes to know from his grandmother that the last avatar of lord Vishnu is preordained to take place in the Kalyug era, he becomes immensely curious to find out more about it. This inquisitiveness from his side leads him to an unusual discovery. Interestingly the boy begins to believe that he is the Kalyug Avatar of Lord Vishnu and starts thinking himself to be God. What follows thereafter is an interesting tale of myths and reality.

Adhinath Kothare plays an important role in the film. Leena Bhagwat and Sunil Abhyankar have also done a wonderful job in the film. The film is an enjoyable mix of the myths and facts. The writer has succeeded in making it watchable for both grownups and children. The direction is commendable . National award winner writer, Nitin Dixit, has penned down the script.

The child actors , Kaustubh and his friend steal the show with their performance. Their acting skills have been well brought out by the director.

Music is apt for the film that appeals to the young audience. The drama and the ensuing suspense is a treat for children. Mihiresh Joshi, Yash Kulkarni and Ashish Vidyarthi play their well. The story beginning in a household rightly progresses with twists and turns and keeps the audience glued.

It is a great watch for the weekend with family and friends. The child artists bring in freshness to the story that is enchanting for audience of all ages.