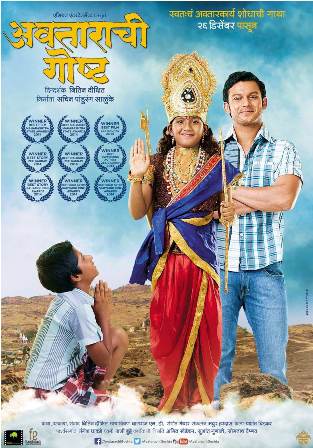 Produced by Asian Entertainment and directed by Nitin Dixit, upcoming Marathi movie called Avatarachi Goshta is ready for release and will hit the theatres all over Maharashtra very soon. The prime man behind the film, Nitin Dixit, who has composed the screenplay, script as well as the dialogues, is extremely excited to see the audience reaction, as this film will be his first stint as a screenplay writer. The film also broadcasts the two debutante child artists, Mihiresh Joshi and Hash Kulkarni, who will be seen rubbing shoulders and sharing screen space with renowned artists, Sulabha Deshpande, Leena Bhagwat, Adinath Kothare, Sunil Abhyankar as well as Rashmi Khedekar.

Avatarachi Goshta has already received many prestigious felicitations and awards. Notable ones are the honorary award this film received at the 51st Maharashtra State Marathi Film Festival 2014, for the best dialogues, best direction and best film. At the Zee Gaurav 2014 awards, Marathi actress, Leena Bhagwat was presented with the Best Supporting Role award. The film also received the awards for best story and best film in this award ceremony. Furthermore in the Sahyadri Cine Awards 2014, this film was presented with awards for Best Child Artists, Best Film and Best Story. Seems like Avatarachi Goshta is already a hit before release! Indeed, Nitin Dixit has promised to keep the audience glued to the movie screen throughout the session without even a single moment of boredom. Promotional events for Avatarachi Goshta have begun all around Maharashtra; the main stars involved in the promotional frontier are Leena Bhagwat, Adinath Kothare as well the child artists.

The movie has already created quite a buzz before its release due to the peppy yet soulful soundtrack. The promotional soundtrack has been composed by Rohit Shyam Raut along with partner Shreedhar Menon. Slated to release on December 26, the much acclaimed Avatarachi Goshta is expected to be quite a must-watch!