Tapaal Movie Review A Little Boy, a Postman and a Journey ! 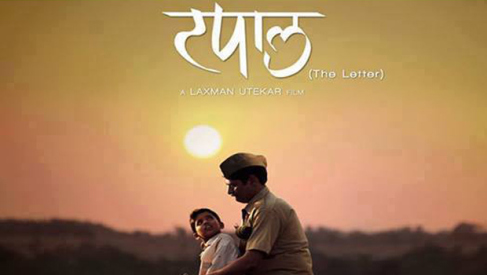 About The Film: Tapaal is the debut of Bollywood cinematographer Laxman Utekar. It has won many awards in international film festivals including the ones in South Korea and South Africa. The actors in the film have also been much appreciated and honored with awards in these festivals. In 51st Maharashtra awards, the lyricist Prakash Holkar received the best lyricist award. The lead characters are played by Nandu Madhav, Veena Jamkar, Urmila Kanetkar, Ganga Gogawale, Jayant Wadkar and Rohit Uttekar.

Review : A little boy and a postman! A village in the Maharashtra of 1970s has a postman that not only delivers letter but delivers joy, hope and love. A young boy writes a letter for the first time, for his sweetheart and then what the Tapaal ( which means the Post box in the Marathi ) brings for him is the film all about .

Let us shift gears from our busy life and plant ourselves in a time when the Postman was no less than a sutradhar in our lives. He brought letters from our loved ones and gave an impetus to our lives. He was one of the few well read people in our villages and hence the respect. But what about the bond that we unknowingly formed with him, who brought joy and laughter and hope to your life enclosed in envelops. Devram ( played by Nandu Madhav) is one such postman and the intricacies of a rural life are so delicately woven in the film that we are compelled to feel the bond between the villagers and the postman. Rangya ( played by Rohit Utekar) writes a letter to a girl whom he is very fond of but after he posted it, he wants to get it back fearing the adverse consequences. How postman Devram helps him to deal with this predicament and come out of the confusion leads to a beautiful relationship between the two.To Devram and his wife ( played by Veena Jamkar) who are a childless couple , Rangya ushers in love and happiness. How the relation precedes for these simpleton rural people is a truly touching story.

The performers deserve all the awards that they have received at the film festivals. The director has left no stone unturned in bringing each character to life on screen. The film has portrayed rural life and scenes with a heart beating reality. The music composed by Rohit Nagbhide provides a backdrop that intensifies the story and makes it more impactful.

Tapaal is a film not to be missed for its simplicity and its touching story.