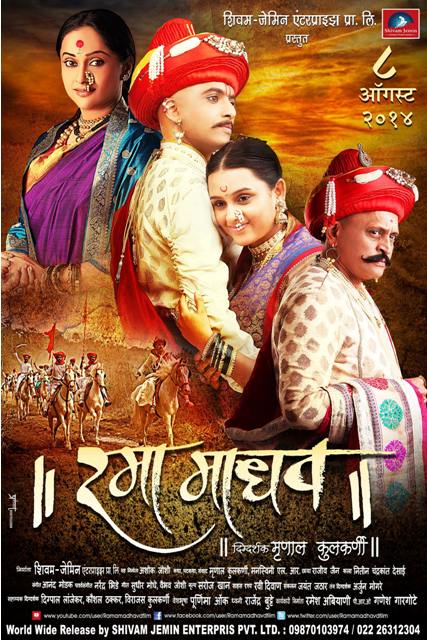 When Mrinal Kulkarni set to shoot the film, Rama Madhav, she was least bother to know that she was the first women director in the country to shoot a periodic film. She paid least attention to such records and ventured into her second directorial product Rama Madhav which is a subject she says is close to heart apart form being one that made her most curious  about since her child hood. Her grandfather was a renowned historian and today she feels proud to have brought a subject that is confined only to history books but has a far reaching significance.

We know that the Peshwas were the most powerful rulers of the Maratha region . Their braveries in the war and their splendor is still part of Marathi legends and stories. But these known aspects are not what Mrunal deals with in the film. The film , as suggested by the title, deals with the intricacies of there relationship between the royal couple , Rama and Madhav. Warriors have their place of significance in a dynasty but is that all Peshwas did?The film unravels some least heard parts and aspects of the family , their intertwined relationships and both complicated and simple characters that are interesting even to the audience of today. The story revolves around different characters in the dynasty in the period . It opens with the young Ramabai getting down from the palanquin and marveling at her  law’s house where she has just reached. This sets up the  tone for the film which is about family ties of the dynasty. There is Anandibai who is a controversial character in the history because she had plotted against her nephew. Her cunning and plotting is not portrayed here but how she was extremely fond of ornaments and her toiletries is what is shown here.

It chronicles the hardships of the couple, Ramabai and Madhavrao Peshwe in  best and worst of  times , as a Royal couple. The climax of their relationship forms the climax of the film.One more character that enamors you is that of Parvatibai who is a staunch woman and refuses to accept the death of her husband and denies widowhood. To portray such a woman , the actress Shruti Marathe said , was a tough nut to crack. but the actress has come out good in the film and is an attraction in the film.

The performances are as classy as the subject of the film itself. Mrinal , herself chose to play a character that is contrast to her sweet image. Gopikabai leaves the kingdom and later refuses to return ot the kingdom even when the last rites of her son are being performed. Though Mrunal keeps her character low profile , other actors like the lead actors have struck gold with their performances. Parna Pethe as Ramabai and Alok Rajwade as Madhavrao are splendid and well done. Shruti Kalsekar as the young Ramabai also excels in her acting.

Music by Anad Modak takes you back to an era that breathed with the richness of the culture. The songs are aptly placed and beautifully crafted. Another attraction of the film is Aditi Rao Hydari’s item number in the film that leaves everyone enthralled.  The songs have been wonderfully choreographed by none other than Saroj Khan.