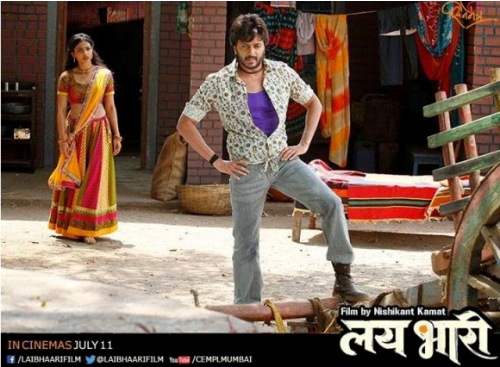 Lai Bhaari has taken Marathi cinema by storm. The film that was released in the second week of July, is still going strong and attracting huge number of audience. The film has become the highest grossing cinema in Marathi till today. The film now continues its run in the fourth week. The film released when  Salman khan’s Kick also took its place in the cinemas but it remained undeterred by the star power and has raked in huge mullahs for the filmmakers.

Riteish Deshmukh marked his entry in Marathi films with Lai Bhaari. The film deals with a well intentioned affluent woman and her twins one of whom she dedicated and gave away to lord Vithala , who blessed her with the children . Riteish plays the role of the twins . The film is an action drama and is a complete entertainment package. Made with a budget of 8 core it is the most expensive Marathi film till today. With no other Hindi film in its competition, Lai Bhaari pulled audiences in great number. The film collected 17.2 crore in the first week which was followed by 8.96 Crore in the second. Its collection in the weekends have been impressive. In the third it earned around 5 crore which was again a decent sum. The Marathi dominated regions are still expected to bring good collection to the filmmakers. The film’s business has been highly impressive in major cities like Pune , Mumbai and Nagpur where the viewership for Marathi movies are high.

Statistics indicate a decline in the collection towards the fourth week. The total sum of collection is expected to be around 30 – 40 crore by analyst.