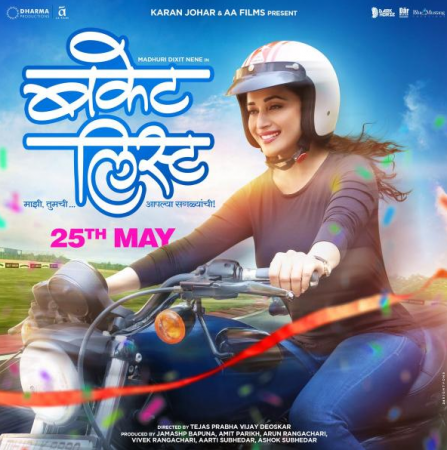 After a long wait, the much awaited M Town movie called Bucket List released yesterday. it was much awaited for only one reason having Madhuri Dixit in her debut Marathi movie with a subtle content and message. The film had several other elements that kept the buzz alive in the media when the film finally released. However, since it is a regional film, it will have is own limitation. The film opened with an okay box office occupancy ranging from 20-30 percent, which kept on soaring with the passing time. The film was released in 409 screen all across the state and other parts of the Indian state as well.
Most of the critics have given the film with a positive review giving the audience a decent reason to catch the movie. It also impressed the audience with its heart warming and delightful story. As per reports, the 1st day box office collection for Bucket List went on to score around 1.25 crore on the first day which is still a decent collection for a M Town movie. Also, with Parmanu released in the B Town, a major chunk in the state was seen shifting towards it, which somewhere has hampered the collection of the M Town film.
Needless to say that the presence of Madhuri Dixit Nene has only created the kind of buzz in the media, which will be encashed sooner or later. The experts feel that the film will get a good boost in the first weekend and even will enjoy a decent surge during the weekdays as well. Hence it would be fair to say that the first weekend box office collection for Bucket List will grow not less than 10 to 12 crore while at the end of the first week, the film will have a collection of around 20 crore. Also, the Ranbir Kapoor fan would catch the movie as he has made his cameo in it.
Share