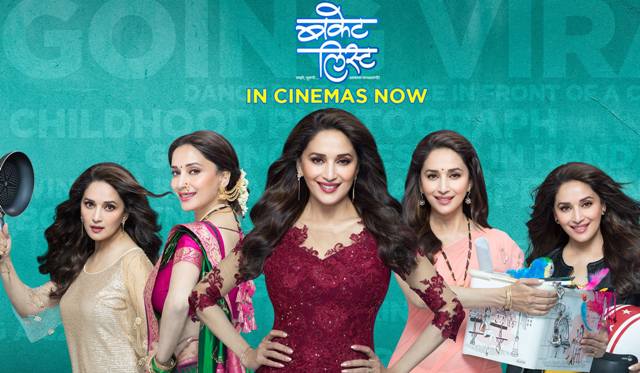 A heart melting film backed with subtle message and tangible performance
Director -Tejas Prabha Vijay Deoskar
Star cast – Madhuri Dixit, Sumeet Raghavan and Vandana Gupte
Story – Tejas Prabha Vijay Deoskar and Renuka Shahane
Music – Rohan-Rohan
Cinematography – Arjun Sorte
Studio – Dark Horse Cinemas, DAR Motion Pictures and Blue Mustang Creations
Rating – 3.5
Plot
After undergoing her heart transplant surgery, the leading lady in the film called Madhura played by Madhuri Dixit-Nene is back to doing things which she did the best- simply taking care of her own family. Then she was seen finding out the bucket list of the organ donor and soon her life is seen changing altogether.
Review
Madhuri Dixit in her debut Marathi movie is seen doing a number of things, which include riding a cruiser bike, getting drunk and getting a selfie with Ranbir Kapoor. The film Bucket List is all about a homemaker who is simply busy making her family happy, and soon she realises that she has lost her personal identity and then starts her journey towards self-realisation. He life changes after getting her successful heart transplant as she comes to know that it was a 20 year old called girl called Sai who gave her heart to save the life of Madhura. She then lives the life to complete the bucket list of her deceased donor. With this story, the film has an interesting saga to tell the M Town audience, unique, interesting and something even weird as well. But this time the M Town audience has something really unique kind of script to enjoy and that too from a superstar of Bollywood.
Talking about the performances, Madhuri is simply awesome in her performance and so were the others in this film. She in her feel good mission for a girl reclaiming her identity would be interesting to explore. She simply owns the movie and has successfully failed with flying colours. She has managed to make her body language and other details in a perfect manner making it big and bigger for the audience. Others who gave their notable performances include Sumeet Raghavan, Vandana Gupte, Sumedh Mudgalkar and Renuka Shahane, And don’t forget to catch the veteran Shubha Khote’s cool performance as a nice grandmother.Talking about the other elements like music, screenplay, editing and photography, every aspect of filmmaking has its own value that has helped to escalate the entertainment value of the movie.
Bucket List – The Last Word
If your have a bucket list with catching only brilliant films, this film may help you tick that box. Yet if you are keen on looking for a good heart-warming weekend with a film, Bucket List can be a good bet. And if you are a Madhuri fans, then you will not miss this one.
Share