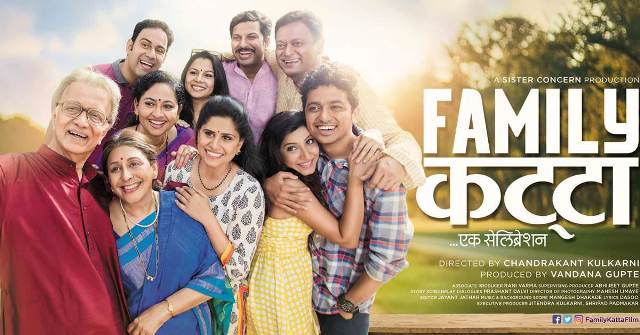 Vandana Gupte’s production venture Family Katta is ready for release on 7th October.  The movie has been launched in a star studded ceremony in which the released date was also finalized. Dilip Prabhavalkar who plays an important role in the movie spoke on the occasion and praised Vandana Gupte highly. According to him, Vandana, the actress and producer of the film Family Katta, it is unique family drama that is watchable not only for elder audience but will be equally enjoyable for the youngsters.

Family Katta has an interesting star cast that includes Dilip Prabhavalkar, Vandana Gupte, Sai Tamhankar, Sachin Deshpande, Kiran Karmarkar, Gauri Nalawade, Prateeksha Lonkar, Alok Rajwade. Dilip Prabhavalkar and Vandana Gupte play a couple in the movie. The story revolves around the golden jubilee celebration of the couple’s marriage. Vandana Gupte said “ All the actors have given their best in the film. But what is more important is that each one of us has enjoyed working in the movie. We hope the same love and happiness comes through to the audience.

On October 7, Family Katta will welcome the audience to a grand extravaganza of love , values and celebrations.

Marathi actors who made their mark in other languages