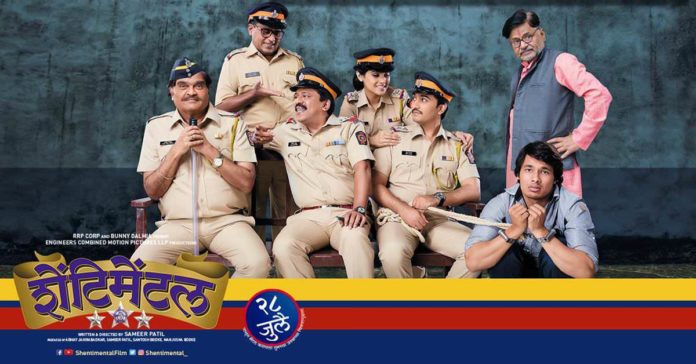 Synopsis: The film Shentimental is an upcoming Marathi movie in M Town, which is produced by Abhay Jahirabadkar, Sameer Patil, Santosh Bodke, Manjusha Bodke under their respective banners including RRP Corp and Engineers Combined Motion Pictures LLP. The movie is directed by Sameer Patil, while it has Ashok Saraf, Upendra Limaye, Vikas Patil and Pallavi Patil in the lead roles including Suyog Gorhe, Raghubir Yadav, Ramesh Wani, Madhav Abhyankar, Uma Sardeshmukh, Pushkar Shrotri, Rajan Bhise and Vidyadhar Joshi in the supporting roles. The film is written by Sameer Madhusudan Pati, while the music is composed by Milind Joshi. The lyrics is written by Milind Joshi, Dasu Vaidya, Guru Thakur and the play back singers include Avdhoot Gupte, Bela Shende, Shaan, Nihira Joshi Deshpande and Pavani Pandey.

Further talking about the movie as its name suggest, it is a comedy and drama genre movie, which is hitting the theatres on 28th July 2017. You have a police constable played by Ashok Saraf who works in a police station who is always busy solving one criminal case to the other remaining often work loaded with several deadlines. However, amidst being busy in his day to day life, he loves to find out small acts of happiness that makes people sentimental. If you are you are keen in watching up a comedy with sentimental edge then catching up this film is really interesting. One day he and his police team has to go to Bihar, so, what happens the next is interesting to catch. The trailer released in the media showcases the story along with giving you the glimpse of the way the Police works.