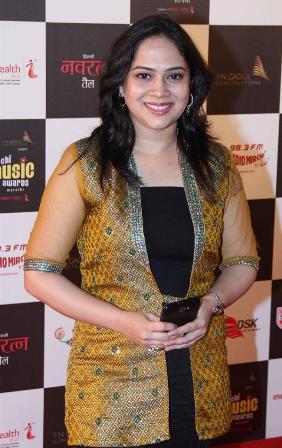 Starting her career at a young age in the music industry, Bela Shende has established herself as a leading singer in Bollywood and Marathi industry. This young girl from Pune is blessed with a soulful voice that breathes a magical sweetness to every song it touches. In our times when every now and then a new talent appears through reality shows, Bela has carved a niche for herself as a talented singer who can transform a song with her lively voice. She bagged the Best female lead singer in the National Awards 2014 for the Marathi song Tuhya Dharma Koncha.

Hailing from Pune, Maharashtra, Bela bequeathed music from her father’s side. Her grandmother and her father both are singers and she was trained by them at an early age. As an aspiring singer she participated in the reality show Sa Re Ga Ma and won the contest. This brought her many opportunities and with every new song, she struck gold with her singing. She has worked with all the leading music directors of today. The list includes music composers like A. R. Rahmaan and Shankar Ehsaan and Loy. In the recent years she has also rendered her voice to the much revered music composer of southern industry, Illyaaraja. She is a leading singer not only in Marathi and Hindi but also in the southern industry with many offers coming her way in the recent times. From being a young winner of the Sa re Ga ma contest, she has come a long way and her voice has also underwent change to acquire a maturity. Though she has an endless list of awards for her Marathi songs, in Hindi she came to fame for the song Mann Mohana in the film Jodha Akbar composed by A. R. Rahaman. Bela ‘s voice gave a scintillating feel to the devotional song enacted by Aishwarya Rai. The song won her best female award at Mirchi music awards that year. Later she also rendered her voice to Sohail Sen’s composition of Su che Chhe and Koi Jaane Na in the film What’s your Raashi? Among her recent releases is the film Saangto Aika (2014 ) in which she sang Daatake Abhaal.

Bela ‘s down to earth demeanor embodies the modesty of music. She is a warm and humble person and that personifies her music. In today’s time, when music is mostly commercial and lacks originality, she believes in retaining the true essence of music, a quality that she owes to her gurus, her father and grandmother.