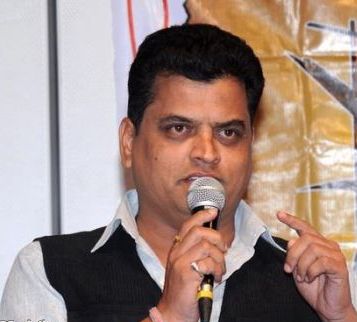 Sharad Ponkshe aspired to be an n actor right after he completed his higher secondary education. With a dream to become an actor he joined a drama school in Mumbai and became an active part of a popular drama group. His early assignments at stage brought him success in the form of plays like Varun Sagde Sarkhe.

On television he has played many vital roles from the beginning of his career. He played a significant character in the super hit serial Damini. The serial in which Prateeksha Lonkar played the leading role of a highly principled police inspector, Sharad impressed everyone and this paved the way for his acting career in Marathi films. Later he paired with the actress to play a married couple in films like Tukaram and Mokda Shwas.

Sharad Ponkshe is best known for films and serials like Angihotra , Kunku, Mi Nathuraam Godse Boltoy and Vaadalvaat . He has been impressive both in good and negative roles. Especially his roel of Devram Khadgale in a Marathi serial was highly appreciated.

His most impressive performance in recent time came in the film Tukaram which released in 2012. He played the father of Tukaram, played by Jitendra Joshi, which he later said was a challenging role to play for actor of an age. The film was critically highly successful and won many awards. At present he acts in the serial Unch Majah Zoka in which Spruha Joshi and Vikram Gokhale also play the lead roles. He essays the role of Govind Ranade. Recently in the serial Durva, he replaced the actor Vinay Apte in the role of Anna Patil. He excelled in the role too.

Although he has appeared in many commercially successful films, as an actor his critical acclaim rests on his title role in the controversial play Mi Nathuram Godse Boltoy. The actor acted in the play that explored the subject of assassination of M. K. Gandhi from Godse’s point of view. It not only gave him fame but was instrumental in establishing him as a talented actor in the league of the veterans. Vaadalvaat , a musical TV serial also contributed to his popularity .

Sharad has tried his hand at humor, serious and negative roles and has added his trademark touch to all the roles. In real life too he is a person with many shades. Always jovial and fun loving, he is known to have a heart of gold among his co stars.