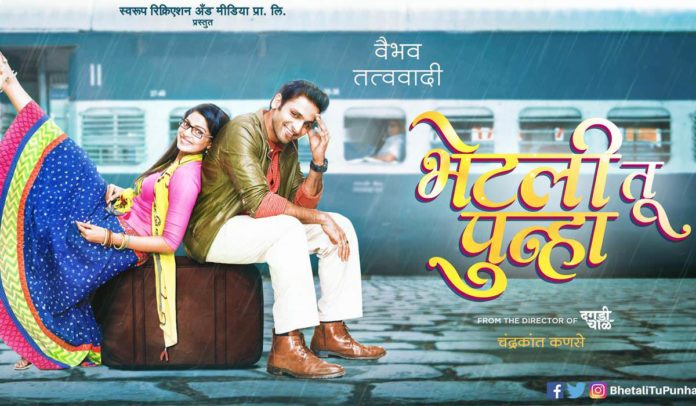 Synopsis: The M Town is not short of movies now. Though we do not see every Friday films releasing yet there are tangible amount of releases in the coming few days. One such film is the one called Bhetali Tu Punha, which has been directed by Chandrakant Kanse. The film is produced under the banner of Atharv4u Recreations in association with Media Pvt Ltd. It is a drama genre movie, which is all set to hit the theatres soon. The story and screenplay is given by Sanjay Jamkhandi while the lyrics have been jotted down by Mangesh Kangane and the DOP is Pradip Khanvilkar.

In this constantly and drastically changing world, we see the destiny changing the paths to different roads and places. In this bad time not all are blessed to stay together, however, some are lucky to have such people around, which certainly include the couple shown in this film. In fact, we search for a better half who can belong to such an attribute. The film is all about finding a right person as your better half and staying together to lead a life worthy to catch.

We tend to find someone for our life once we get the one be it of your choice or comes from the choice of your family or elders, you start your own new journey of knowing to each other over and over again, which is nothing but the film Bhetali Tu Punha wherein you get to see the usual trajectory of our life and the way we carry forward this journey of you two as a couple. Stay tuned for more on this Movie and others.