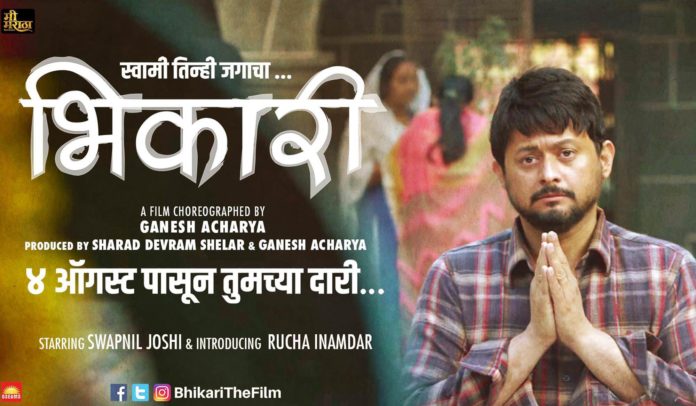 Synopsis: There are several movies to hit in M Town, which certainly include Bhikari. The film is produced by Sharad Devram Shelar, Ganesh Acharya under the banner of Mi Marathi Film Production. It has an interesting star cast which include Swapnil Joshi, Rucha Inamdar, Guru Thakur and Sayaji Shinde in the lead roles, while Milind Shinde, Kirti Adark and Sunil Pal are seen in the supporting roles. The film is directed by Ganesh Acharya, while the movie is hitting the theatres on 4th of August 2017 which happens to be a drama film. Now talking about the other details, the story of the film is jotted down by Sasi while the screenplay and dialogues have been given by Guru Thakur.

The music is composed by Milind Wankhedkar & Vishal Mishra while the lyrics are been written by Guru Thakur. The DOP is Mahesh Limaye and the action master Abbas Ali Mogul. The costume is designed by Sumayya Hasan. Now talking about the plot of the film, it is based on the relationship between a businesswoman and her son. It showcases their terms and the way they lead their life. The film seems to have a good buzz in the media considering the very presence of B Town megastar in the film called Big B who has the cameo in a Marathi movie. Stay tuned to know more about this film and others along with checking the story and other details. Also, don’t forget to comment on the same and let us know what you feel about it.