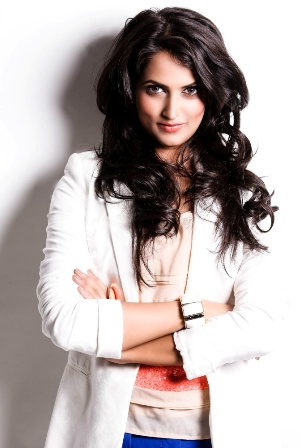 Rucha Inamdar is a young actress appearing in Bollywood and Marathi movies. She has also appeared in Tv commercials with Bollywood stars.

Rucha Inamdar was noticed in Airtel and VIP Skybags commercials. She was picked for the role of Kausar in the movie Children of War which was a critically acclaimed film. With the film, Rucha, got fame and recognition. Later she also worked in the movies Under the same Sun.

The pretty girl, Rucha Inamdar, will soon be signing films in bollywood and other regional languages. She has roped in for Ganesh Acharya’s directorial Marathi film, Swami tinhi Jagacha: Bhikari. The film has been launched and the first clap was given by the hands of none other than Amitabh Bachchan. The launching session was attended by the entire cast of the movie. Rucha wearing a Black designer gown looked stunning in the event. Rucha plays the lead role alongwith the male lead Swapnil Joshi, an accomplished actor in Marathi cinema.

Rucha’s most noticeable ads were VIP Skybags commercial and Airtel commercial. Besides this, thanks to her lean figure and pretty face, she has been very active in the modeling industry. Rucha is considering offers of Bollywood too.