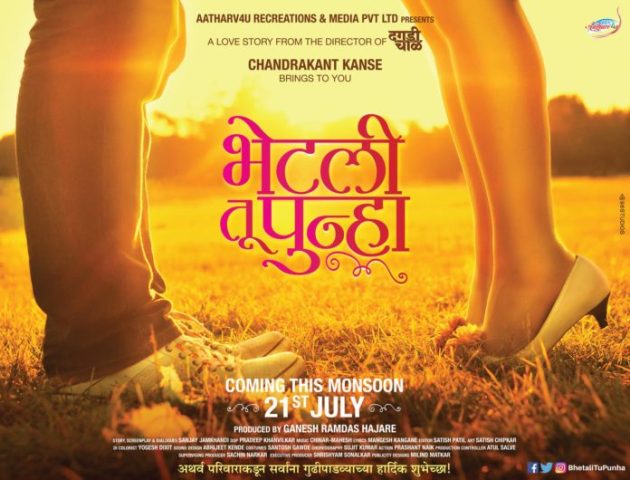 Synopsis: The film Bhetali Tu Punha happens to be the upcoming Marathi Movie, which has Vaibhav Tatwawdi & Pooja Sawant in the lead roles, which is directed by Chandrakant Kanse. The film is produced by Ganesh Ramdas Hajare under the banner of Atharv4u Recreations & Media Pvt Ltd. The lead actors of the film include Vaibbhav Tatwawdi and Pooja Sawant, which happens to fall under the genre of drama. The story of the film is jotted down by Sanjay Jamkhandi while the Screenplay & Dialogues are jotted down by Sanjay Jamkhandi. The music of the film is given by Chinar & Mahesh, while the lyrics are jotted down by Mangesh Kangane whereas the director of photography is Pradip Khanvilkar.

Interestingly, the makers of the movie had named this film as Love Express but considering the grand success of the film Ti Saddhya Kay Karte, they simply changed the title to ‘Bhetali Tu Punha‘. The chemistry of the lead actors of the film has been time tested and they have done simply well for their earlier move Ti Saddhya Kay Karte. Hence the makers have the reason to reunite them for the upcoming movie. The film happens to be a romantic drama movie, and makers are yet to announce any thing about the plot. Hence you got to have patience, while if you still want to have some idea of the film, you can get it from promos of the movie. The film finally releases on 21st July 2017.