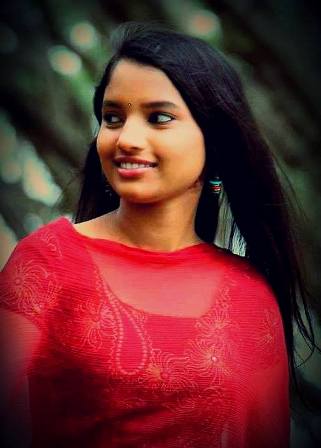 Rajeshwari Kharat is a young and gorgeous Marathi actress. She is originally from Pune and has now movie of theatre industry background as she is the first one to try her luck in this industry. Her family includes her parents – and her father works at a bank. She did not have a single dialogue in the film, but still her role was well received. After passing her HSC Exam, she will be pursuing her graduation in B.Com.

In 2017, after a break of 2-3 years, she will be seen in the movie Item Girl with actor Hansraj Jagtap. The movie will be directed by Pradip Tonge. Talking about her debut Role in the 2014 based Marathi movie called Fandry, Rajeshwari Kharat was a student barely in 9th standard when she started work for Nagraj Manule’s National award winning film Fandry, in the role of Shalu. While casting for Shalu, the makers of Fandry spotted her in Pune, found her home address and approached her with a role.

Her character in the film Fandry of Shalu was appreciated a lot by the critics and the audience. The film deals on a young boy’s infatuation amidst caste-based discrimination. The film set in Akolner, a village near Ahmednagar is about a teenager from a Dalit (lower caste) family, who lives at the village fringe, and falls in love with an upper caste girl. The film won the Grand Jury Prize at the Mumbai International Film Festival. Now, Rajeshwari Kharat is gearing up for her next film called Itemgiri.