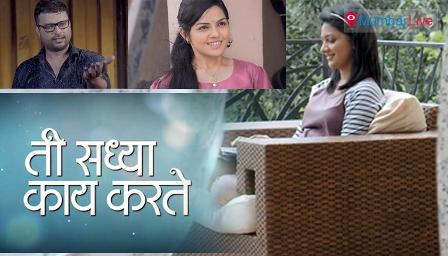 One of the upcoming Marathi movies of Satish Rajawade is Ti Saddhya Kay Karte, which will be releasing in the 2017. The makers of film have released the teasers in the recent past, which has created some amount of buzz in the media. The film is produced by Nikhil Sane, Arving Jog and Pallavi Rajwade under the banner of Zee Studios in association with other groups.

The film falls under the genre of romance and comedy, which together would give a smart blend to the M Town audience. The film has Ankush Chaudhari, Tejashri Pradhan, Abhinay Berdeand Aarya Ambekar in the lead roles.

The film deals with the lost love and childhood things of the lead actors. If you check the film in detail you can find the film actor recollecting all the same with the key question Ti Sadhya Kay Kare (what is she doing right now?) as the title of the movie.  It also showcases the journey of the lead actors from childhood and their friendship and the one sided love affair. The film also depicts what really goes out at the end when the two lead actors separating the two and the way things transpires between the two.