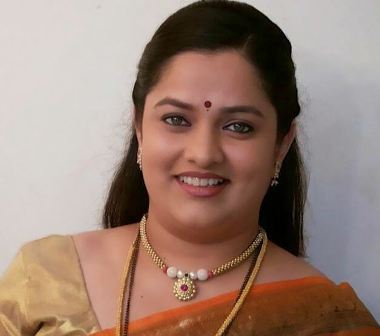 Purnima Talwalkar is a Marathi TV and Film actress who is now known as Purnima Bhave especially after getting married to the son of famous actress Smita Talwalkar. She was born on 22nd December 1978 in Mumbai wherein she was born and brought up at. She did her schooling and college from Mumbai itself and while being a student she had remained at the forefront in a number of cultural activities getting a decent boost in this segment thus helped in deciding up her career in the world of acting. Hence she was linked with a couple of theatre groups and was part and parcel of a number of plays and stage shows.

In fact, her younger sister Pallavi Vaidya too followed her footprints and went on to become a TV actress the two sisters have worked together in a couple of TV shows as well including ‘Avantika’and ‘Honaar Suun Mee Hyaa Gharchi’.She has also acted in Marathi Theater play ‘Wah Guru!’ Now talking about her career in Marathi TV started with a small role in a TV show, which soon gave her a couple of other TV serials as well. Some of her popular TV shows include Don ghadicha Daav, Honaar Suun Me Hya Gharchi and Kalat Naklat. As said, she has also worked in a couple of theatre groups and has remained part of a couple of plays as well.

Some of her theatre plays in which had acted and the ones that were popular include Wah Guru, Nava Gadi Nava Rajya and Olakh Na Palakh in the lead roles. In fact, she had started working for the TV serials since long, which started working with as Baby Atya in Honaar Suun Me Hya Gharchi. She has also worked for the silver screen as well, which include both the B Town and the M Town as well. The Hindi movies include Pyaar To Hona Hi Tha – Hindi and Mehbooba – Hindi while talking the Marathi one, it include Goshta Eka Japtichi released in the year 2013.