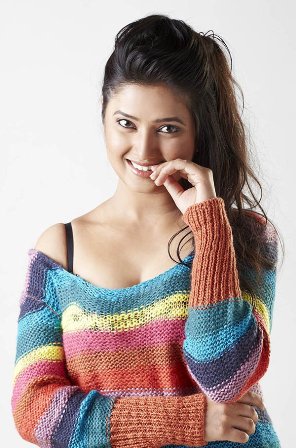 While present day Marathi actresses seek glamorous and modern roles, Prajakta Mali is one actress who loves to don the traditional looks and look equally glamorous. Prajakta has acted in various serials and film in Marathi. She is basically an accomplished Bharatnatyam dancer who made her way to acting industry following her huge popularity as a dancer.

Prajakta was born on 8 August 1989 in Pandharpur, Maharashtra. She was brought up in Pune where she had her schooling and education. Since her schooling days, she showed special liking for dance. Her parents extended full support for her in pursuing training in Bharatnatyam. Afetr her schooling, hse decided to pursue her higher education in dancer and performing arts itself. She then completed her bachelors and masters in Dance from Lalit Kala Kendra , Pune University.  Prajakta excelled in this dance form and won many prizes in TV dance shows. As  a teenager she had participated in many reality shows such as Dholkichay Talawar and Dum Duma Dum on DD Sahyadri. She was also a part of the Hindi kids dance show Kya Masti Kya Dhoom.

Prajakta Mali was a popular dancer in Pune cultural festivals. After she established herself on the small screen as a dancer, many TV serial and film offers came her way. Prajakta was not too keen to take up acting but accepted the roles which had potential. She was choosy about her TV serials she did. Thanks to her sweet and traditional Marathi mulgi looks, Prajakta made a place for herself in the hearts of Marathi audience. Prajakta’s successful serials include Sugaran, Phiruni Navin Janmen Mee, Bandh Reshmache, Suvasini, Aali Lahar Kala Kehar and Julun Yeti Reshimgathi.

She was also active in Marathi theatre with dramas like Nimma Shimma Rakshas, Shivputra Shamburaje.