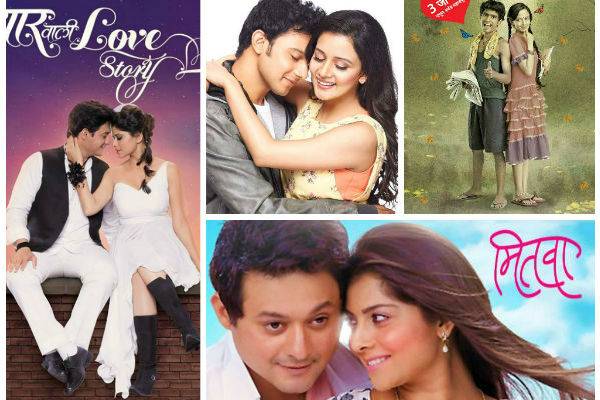 A blood shed Love story. That is perhaps the best way to describe the passionate story of a young couple who become victims of honor killing. With scintillating songs and mesmerizing cinematographic, Sairat is the film that stays with the audience. Rinku Rajguru arrived in Marathi cinema with a bang and became a common name in Marathi household. It is the rarest of love stories on Marathi screen with the touch of poignancy.

Sairat is the highest grosser in Marathi cinema this year.

Ketki Mategaokar and Prathmesh Parab’s love story was a class apart. Don’t we expect some passion and intense emotions in love stories? Well, this was different. There was fun, laughter and drama but of course it was not devoid of emotions. The sequel that followed did fair justice to the expectations and showed Prajakta and Dagdu reuniting in love.

The Love Story of a Hindu Muslim pair in Mumbai! That is just the right formula that works for Indian romantic film lovers. The attractive Sai Tamhankar is paired with the sweet chocolate boy Swapnil Joshi. The chemistry is sizzling between them and as a result all we have is an intriguing love drama.

Swapnil and Sai’s pairing was the USP of the film.

Sulagna Panigrahi and Adhinath Kothare create a lovely campus love story on screen. with interesting twists and turns, the film wins you over.

Does Love have an age limit? Is love at fifty or sixty acceptable in our society? Not many would say yes to this. Varsha Usgaokar returned to silver screen after a long time, to play the love interest of Sanjay Narvekar’s character. This is the love story of an elder couple who decide to start life again after middle age. How far do their grown up sons appreciate this relationship? Cappucino is a rare love story that will touch your heart.

Swapnil Joshi and Anjana Sukhani star in this crime thriller love story. There is investigation, drama , suspense , crime and love all interspersed in this intricately woven story.

Sujay Dahake’s Phuntroo may just qualify to be a science fiction love story. Kekti Mategaokar looks mesmerizingly beautiful in this movie. She plays both the real girl Anaya and her robotic presentation. It is the love story of a gadget geek and his muse, Anaya. It is one of its kind in Marathi cinema.

Spruha Joshi and Siddharth Chandekar come together to form a community of people facing loneliness. But in the process they do not realize when they fall in love with each other. A rare love story that is sweet and simple yet appealing.

Sai Tamhankar and Priya Bapat Put On Weight for Wazandar