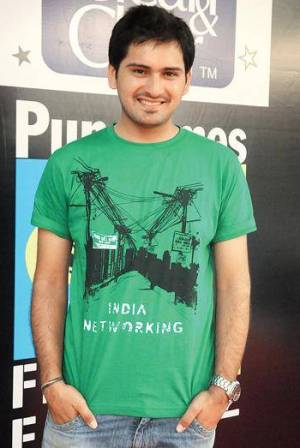 Actor, Siddharth Chandekar believes in grabbing the right opportunities at the right time. He is amongst the young generation of actors who impresses the audiences with not just his looks but also his acting skills. Be it the music lover, Anirudh in the recent film Classmates or the Neel Rajyadhyaksh in the love story, Bavre Prem He, he gets into the soul of the characters and brings onto screen natural characters.

Hailing from the city of Pune, which is the cultural capital of Maharashtra, Siddharth got enough of inspirations to become an actor. After completing his education, there was no delay in his discovery of his career path which was being an actor. In Sidharth’s own words : acting gives him the opportunity to bring to life characters which are all around us and waiting to be enlivened. At the young age of 23, Siddharth is devoted to his career and shows great determination in etching vividly the characters that he plays.

The drama named “ Popat Panchi” proved to be a turning point in his career as he got noticed for his skilled acting in the drama. Sidharth ‘s first break came in the form of Humne Jeeena Sikh liya in the year 2007. It was directed by Marathi director Milind Ukey. Sidharth, along with a group of newcomers played a youngster on the threshold of adulthood trying to make sense of the world and life. Though the film failed to impress the audience but with this film Sidharth took the first step to stardom and got recognition as an actor.

Later Siddharth Chandekar became a part of many multistarrer Marathi movies and a number of Tv serials. Danga 2 BHK – Star Pravah Premiere Movie, Dhabal Ek Taas Timepass (Star Pravah), Kashala Udyachi Baat (Star Pravah) as Aditya MahashabdeAgnihotra (Star Pravah) as Neel Agnihotri – are a few of the Tv serilas in which he played key characters and became a popular face on the Television.

More recently he created a special space of his own in the hearts of Marathi audience with films like Classmates (2015) as Annirudha(Anya) , Bavare Prem He (2014) as Neel Rajadhyaksh and Dusari Goshta (2014).

At present he is working on his upcoming film Sata Lota Pan Sagla Khota.