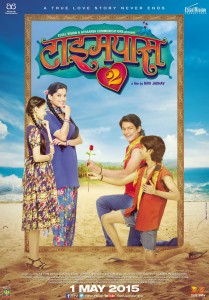 After enjoying huge success with ‘Timepass’, its director Ravi Jadhav had confirmed its sequel “Timepass-2”. The director in a statement said he was quite keen to direct the sequel ‘Timepass 2”. This movie is now ready to be released and the dates are to be announced very soon.

Marathi movie cine-goers are quite excited that they can now enjoy the sequel of this movie, which is regarded to be a masterpiece. The director was said to have asked the Marathi cine fans to suggest a good story for the sequel, since he did not have one. It is stated that the first part was enjoyed immensely by the fans and did receive a good amount of attention. Movie lovers, critics, film industry and just about anyone was thoroughly satisfied with the comedy quotient that was introduced into this movie and was very much expecting the producers to come out with its sequel.

Lead actors Prathmesh Parab and Ketaki Mategaonkar are said to have done an excellent work in the original version. This is one of the major reasons for the movie getting genuine appreciation for everyone. Ravi Jadhav had recently said that he was quite interested to come with second part of this movie. He followed the reactions of the fans and critics on social media in regards to the movie.

Although the original version ended with some disappointment, he director tried to convince everyone for the reason for this type of ending. The question is what to expect from the sequel. It is something that only time will tell.