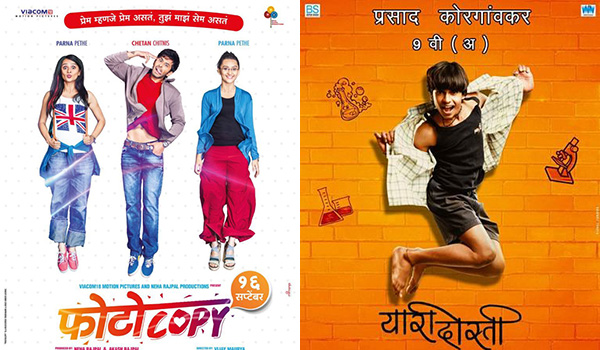 Photocopy and Yaari Dosti are competing this week on the silver screen.  Vijay Maurya directed Photocopy has gathered good reviews from audience and has shown a steady collection from its first day of release. Staring newbies like Chetan Chitnis and Parna Pethe, the film is a fun love triangle with a pair twin sisters and a guy who falls in love with both of them. Being a campus film, it attracted many viewers from the younger generation. The young crowd reportedly enjoyed the film and got a fairly good publicity.

Critics, on the other hand, were not all praise for Photocopy. The actors Parna Pethe and Chetan Chitnis got good reviews for their work by the critics. Ganesh Matkar from Pune Mirror said photocopy lacks logics and credulity. While Mihir Bhange from TOI called the movie average.

Photocopy was made under a budget of 1.90 crores. The first day collection of the movie was 20 lacs. The second day it pushed upto 34 lacs. By the end of shows o Sunday, it ended up with 52 lacs. Despite of mixed reviews, the theme and packaging of Photocopy looks attractive. It is sure to keep the collection box ringing even on weekdays. The total estimated collection is around 80 lacs. The occupancy percentage of the theatres was around 75% across all the theatres.

The other release, Yaari Dosti has got thumbs down from the audience as well critics. It could barely pull up any decent collection. Critics have given their verdict and called it a total failure.  It managed a collection of 2o lacs in the first two days of its release. It reported an occupancy rate of about 50% in theatres.