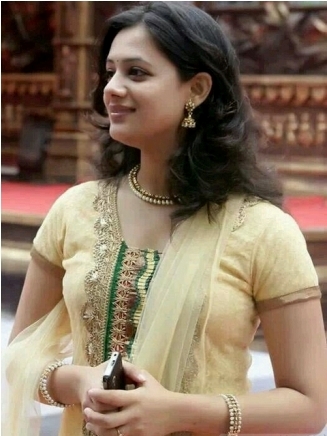 Writing is her passion and acting is her penchant. Born with a talent to write poetry and songs, Spruha Joshi is today a poet, an actress and a lyricist. Known in the literacy circle for winning awards for her poetry at a young age , she is familiar to the common people as beautiful and talented actress. At the age of 24, Spruha has many awards and accolades to her credit which sets her apart from other youngsters of her age. She has recently turned into lyrics writing and has penned down touching lyrics for the Ajay Naik directed film Baavre Prem He.

Spruha Joshi Wiki : Spruha has acted in various Marathi serials and few films in all of which she caught attention with her natural acting and her simplicity. Currently she plays a leading role in the serial Eka Lagnachi Teesri Gosht on Zee Marathi . Starting her career in acting with Marathi plays, she is a very popular actress in Marathi theatre today. In the year 2014, Spruha received Godrej face of the year award.

Although Spruha is much appreciated for her acting, her films have not been very successful. She has played lead roles in films like Morya and Sur Rahu De. She played a significant role in the film MaayBaap in the yera2004, when she was still a school girl. Her popularity as an actress mainly rest on her highly watched Tv serial Eka Lagnachi Teesri Gosht in which she plays the role of Isha Deshmukh. It is a sequel to the previous hit series Eka Lagnachi Dusri Gosht of which Spurha was a part of. Her role in another hit Tv series Unch Majha Zoka was also highly appreciated.

As a poet, Spruha Joshi  writes with a natural spontaneity and vigor but also keeps her work graceful and free flowing. Her famous works of poetry include Chaandanchura and Lopamudra. Both the collection of poetry were warmly received by readers. Among her cherished awards as a poet is the very reputed Kavi Kusumgraj award. When she was merely 14 years of age, Spruha made her parents proud by winning the Balashree Puraskar in the year 2003.

Spruha is being approached by filmmakers to write lyrics and she began lyrics writing with the recently released film Baavre Prem He. Last year the pretty actress tied the nuptial knot with long time partner Varad Laghate.