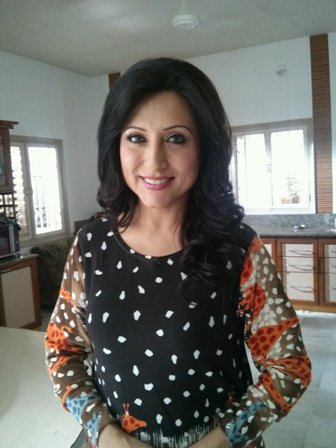 Kishori Shahane is currently shooting for a very potential role in the film Lakhoan Hain Yaha Dilwale. The Marathi actress who is known for her dedication to acting and her professionalism is commendable. She is playing the role of a very old woman in the movie who is the mother of the character played by Aditya Pancholi.

Kishori Shahane is one of the much acclaimed actresses in marathi entertainment industry who has made her mark in both films and in the television industry. The Hindi film Lakhoan Hain Yaha Dilwale is a family drama which is being directed by Munnawar Bhaghat. Alongside Kishori Shahane, the film stars lesser known actors like Vije Bhatia, Krutika Gaikwad, Aroon Bakshi, Anju Mahendru. Aditya Pancholi , who was going through a bad patch in life and career will be playing a significant role in the film.

For the film, Kishori dons the attire of a much older woman with a panache of her own. With the make up and the attire , she adds her personal touch of effortless expressions to the character of Aditya Pancholi’s mother. The actress who has pulled off many challenging characters in Marathi is all set to add another feather in her cap by playing this potential role of much elderly woman.