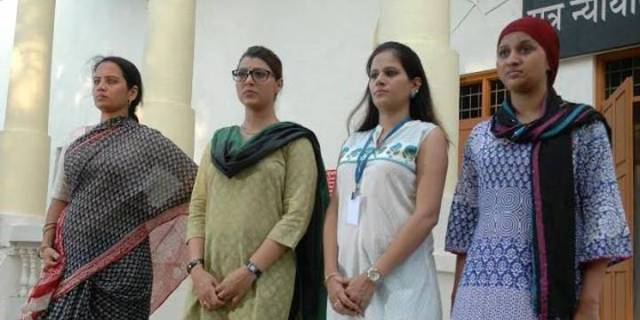 Candle March deals with the issues of crimes committed against women in the country, their aftermaths and their struggle for justice. Yes, that sounds like a serious subject, not really a subject suitable for entertainment. But once a while such films that draw us nearer to reality work as an eye opener. Candle March indeed intends to open our eyes to the skimpy punishments given to such crimes which hardly deliver any justice to the victim.

Starring Tejaswini Pandit , Manava Naik and Saili Sahasbudhe in the lead, the film hits you hard like a punch. The script covers all aspects of the subject like the actual crime, its struggle to reach the court and the trails that follow. The emotional and social side of the issue is also depicted realistically. What you expect from such films are messages and lectures. Yes there is the message of treating the victim sympathetically and to stand by the stand of the victim. But they are not given in the form of lectures but they are shown to the audience realistically.

Candle March definitely makes an impact. The ending might just seem a bit dragged for it becomes difficult to culminate the various stories into one ending. But the treatment of the subject is commendable. Victims coming together to seek justice and also fighting to change the law that is inadequate for delivering justice are striking and powerful aspects of the movie.

Performances are commendable in this film. Tejaswini Pandit , playing Anurata, leaves no stone unturned to play fighter for the cause of other victims , besides being a victim herself. Manaka Naik plays a TV channel reporter who joins Tejaswini in the fight. Saili Sahasrabudhe plays Sakhi, a recent victim for whom the struggle begins.

Director Sachin Dev has tackled the subject with maturity and dexterity. Kudos to the producers Anjali and Nilesh Gawade for bringing to such issues and such a bold subject on the screen. Sachin Darekar’s script is impactful and contrite.

The film is not an entertainer but a drama that can make you uncomfortable because that is what reality does to each one of us. Reality and truth is hard hitting and difficult to face. Still, Candle March is worth a watch if you want to a well aware citizen.