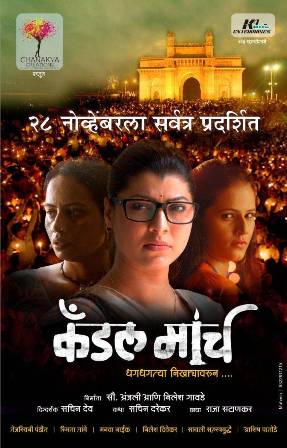 Marathi cinema has been witnessing a sea of change, especially with meaningful films being made more in number portraying a particular society and trying to bring out the issues faced by a particular person or group and they face it. ‘Candle March’ is a Marathi movie that is said to be based on a real story which revolves around 4 female protagonists Manava Naik, Sayali Shastrbudhye, Smita Tambe and Tejaswini Pandit. These four in the movie are shown to be harassed sexually by the fair sex and shows how they try to overcome it and show women ‘power’. This movie has been presented by Chanakya Creations along with the association of K4 Enterprises.

The producers of the movie are Nilesh Gawade and Anjali. Sachin Dev is its director. The other star cast of the movie includes Nilesh Diwekar and Ashish Pathade. Sachine Dareka has written the script and Amritraj has given music that is said to have some fine tunes which is expected to sway the audience. The lyrics has been given by Mandar Cholkar, while cinematography by Raja Satankar. Dialogues and screenplay has been given by Sachin Deve and Sachin Darekar. Art is by Santosh Phutane. The movie has been slated to be released on 28th November 2014.

The outline of the story is as follows. ‘Candle March’ is an interesting Marathi feature film that is based on a true story of 4 women who try to struggle in this highly biased world where men are said to dictate the terms. A chain of events is said to connect all the 4 protagonists and have them united to fight against present system and injustice that prevails the society against women in general. Story of the movie is mainly inspired from well known sex scandal incidents that take place in the country every now and then and can be termed to be an eye opener.