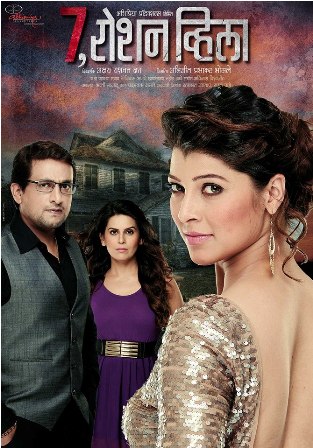 The stage is all set to witness the grand release of the much awaited Marathi movie “7, Roshan Villa”. The movie buffs of Maharashtra are counting upon their fingers for the movie hitting the theaters.

Plot : This movie, which belongs to the category of the thrillers as its genre, is directed by Akshay yashwant Datt and abhi priya production had shouldered the responsibility to produce the movie. The pivotal roles of this movie have been casted with popular faces like Prasad Oak, Sonali khare and Tejaswini Pandit. Shrinivas Bhange had handled the major responsibilities of documenting the screenplay and the dialogue for the movie apart from writing the basic story that forms the prime plot for this movie. The audience can definitely expect the film to have superlative works of cinematography as Mahesh Aane had been entrusted to work upon this aspect of the movie.

As conversation went with the Director, he is confident and optimist about the probable success of this movie. As per his opinion the film would have dramatic twists that are the hallmarks of the thriller category of movies. The screenplay, as per the director, had been taken ample care of to ensure that the twist do not turns the movie melodramatic that hampers the pace of the movie. It had also been ensured that the sub plots formed of the twists do not dilute or loose up the prime plot of the movie. Last but not the least; the screenplay had been always monitored to check the accumulation of those extra fats upon its body that sometimes takes off all the speed and the charm from a movie.

Though a thriller type of movie, this film shall have substantial good works on its musical aspects too which had been worked upon by the duo of Avinaash- Vishwajeet.