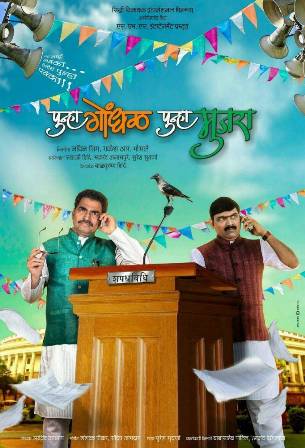 The Marathi movie buffs are eagerly waiting to catch the first show of the much awaited Marathi movie Punha Gondhal Punha Mujra once it hits the theater on the 10th day of the month of October.

Belonging to the category of “Drama” for its genre this film is directed by Balkrushna Shinde, while Navin Singh had teamed up with Rakesh R Bhosale to produce the movie. The leas casting to the movie had been made with faces like Sayaji Shinde, Alok Nath, Swapnil Rajshekhar, Purnima Ahire and Serena, all of whom hold popularity with the Marathi movie audience.

Arvind Jagtap has shoulder the important task of writing the screenplay and the dialogues for the movie. He is also to be credited for documenting the basic story, forming the main plot to this movie. The musical aspects for this film had been taken care by Amitraj and therefore the audience can surely expect richness in this department of the movie too.

The director has assured the audience that this film shall be slim and trim in terms f its screenplay and the audience shall definitely like the pace of the film. He claims to have monitored the film although to ensure that the sub plots do not makes the audience to lose track of the prime plot. Tough there shall be numbers of dramatic twists although the movie, as per the opinion of the director, they shall not turn the film to be melodramatic that happens to the tendency with dramatic films.

The movie shall have notable works of comedy that shall bring dramatic relives in between the unfolding of the movie.   The audience can definitely expect to see well timed and witty comedy acts as this department of the movie had been entrusted to a team that have calibers of Makrand Anaspure and Syaji Shinde in it.