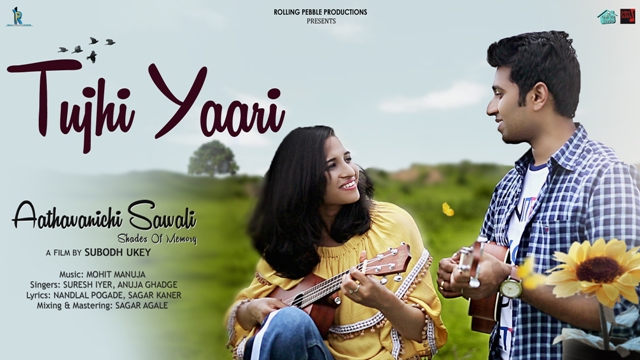 Directed by Subodh Ukey himself, the drama film also features Ketan Bansod, Gayatri Dhole, Laxmi Borkar, Sayyoni Mishra. Music of the film has been composed by Mohit Manuja & singers are Suresh Iyer & Anuja Ghadge. The film showcases a beautiful bond of friendship between a teenager & a flower.

“Every person has their life filled with some memories which always stay with us in every situation. Even though we live along with these special memories, we can only feel the emotion. We cannot bring it to reality once again. Thats what we have tried to present in the movie.” – Subodh Ukey (Actor & Director)

Produced by Rolling Pebble Productions, “Aathavanichi Sawali” revolves around a little boy ‘Bablu’ who loses his school friend at a very early age. Years later, he opens up about the incident to a newly found friend.

“Subodh had narrated the script to me & I found it very emotional & powerful. Moreover, he also gave me an opportunity to compose the music without any limitations or frameworks. I was very excited to compose songs based on friendship & compassion” – Mohit Manuja (Music Director)
Music Album of “Aathavanichi Sawali” has been launched on Apple Music, Saavn, Gaana.com, Hungama, Spotify along with the music video of first song ‘Tujhi Yaari’ on  Youtube. The film is slated for film festivals lined up in 2018 & 2019. After film festivals, the makers will later release the film pan-India.