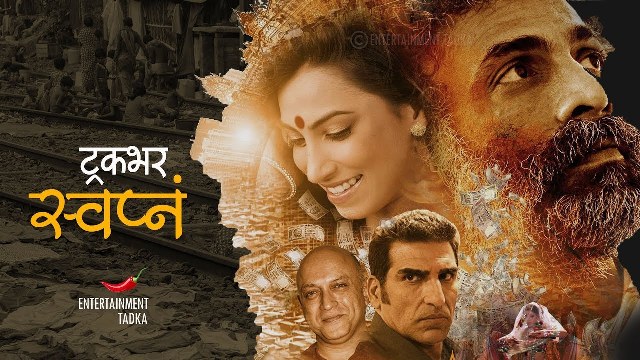 Meet Raja played by Makarand Deshpande who aspires to dream of educating his son Sunny played by Sahil Gilbile in the best school and thus making him a lawyer. For that, he is seen leaving behind his agricultural land in the Konkan area and then shifts back to the slum area in Mumbai along with his wife (Kranti Redkar) and his two children. So, what happens next would be interesting to watch in the film.

We know the city of Mumbai as a city of dreams and daily we have 40 families on an average of around 500 people shift to the city in hope to make something big in this city by pursuing their dreams. Some of them are interested in shaping up their lives along with keeping their kids educate and thus bringing them to the city. Some of them are seen having the capacity of living in lavish homes and others stay in slums in the city. Despite the difference no one really stop to dream. This film also shows the glimpse of the life of such people who struggle to meet their ends but aspire to see their next generation with all the things they have failed to see in their lives. The film is seen having the heart in the right place with several plague in its development with the best appeal.

But the scope of their roles is so less that they can’t help the film much. As Raja, Makarand Deshpande is alright but it is Kranti Redkar and Smita Tambe (in the role of the family’s neighbour) that shine in this film. The film has established actors in it, which include Manoj Joshi, Vijay Kadam, Mukesh Rishi, Asha Shelar and Suresh Bhagwat, and they have given their best over the silver screen. Talking about the technicalities of the film, it has given something the best and it helps up to stand out in the movie.

The film Truckbhar Swapna lags behind in many things right from becoming predictable to typical dialogues and screenplay. With the director have done a bit of more homework, the film could have gone in a better way

"Aathavanichi Sawali” — a Marathi artistic film featuring Subodh Ukey & 2 child actors has been slated for film festivals lined up in 2018 & 2019.