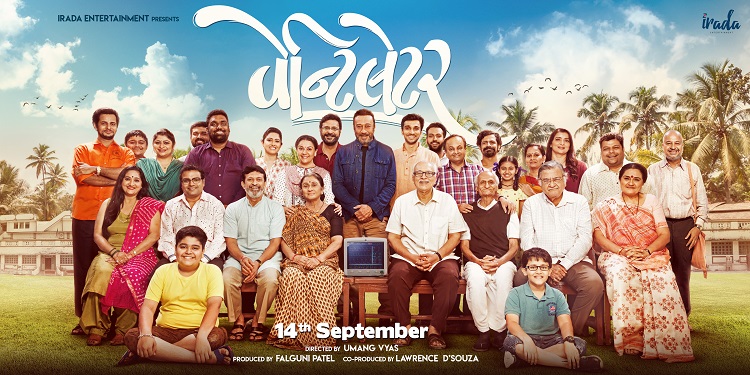 With the news of National Award Winner Marathi ‘Ventilator’ appearing as an adaptation in Gujarati spreading like wildfire, the Gujarati audience is eagerly waiting for the release. The poster for the film released earlier has not only caught the attention of Gujarati families but also got them engaged in family discussions like no other!

The makers of the film are also equally eager to bring the film to the audiences. Jackie Shroff in the lead role of Jaggudada in ‘Ventilator’ has been the talk of the town and the Gujarati audience is definitely going gaga about it. Jackie Shroff looks stunning and at ease playing a slightly different role in a film in his mother tongue.

With his mesmerizing acting, he is sure to leave everybody stunned! The entire ensemble infact is going to mesmerize everyone like no other. With a simple casting that matches the perfect tone of the film, the entire cast will surely leave you enthralled.  Life in modern times, engaging traditions blended with modern science and a fast paced family drama is what the trailer boasts of!

‘Ventilator’ will make you smile and super emotional at the same time. It will let you engage with age old family traditions and ultra-modern sciences, with Jaggudada’s “Ayeee biduu” and other iconic dialogues to balance it all out.

Top ranking team from Gujarati theater and film namely Pratik Gandhi, Mitra Gadhvi and Manan Desai, Ojas Rawal and Sanjay Goradia are also playing key roles. They perfectly depict the culture and all the traditions of a Gujarati household. Gujarati ‘Ventilator’ is directed by Umang Vyas and the screenplay for the film has been suitably adapted from the Marathi fim by Niren Bhat.

With ‘Ventilator’ Gujarati, a complete family drama, you are in for an experience quite different from any other! Do not miss the action and emotions exploding at the screens near you. This family drama is worth a watch for sure. A scintillating Jhalak of the film is being released today and the film ‘Ventilator’ is releasing in theaters on the 14th September.