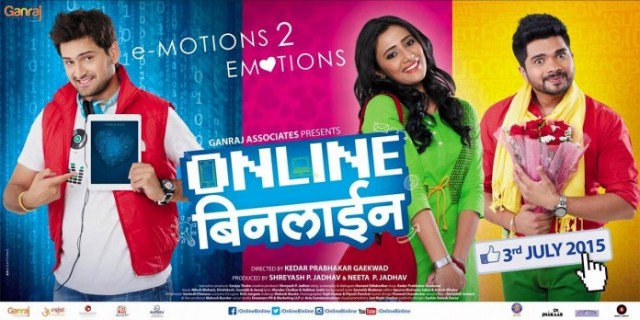 Can you spend a day without internet ? Have you ever felt that you just can’t do without your smart phone? When youngsters all over the world have  become addicted to internet and smart phone technology , how does one cope with the dependence on the virtual world ?

Online Binline comes as a question to your internet addiction. This Kedar Gaikwad directed movie might just make you think whether you are one of those people who just don’t know to draw the line between real and virtual world. Siddharth Chandekar , Hemant Dhome and  Rutuja Shende play the lead roles in this story of internet , “ the network”, and it also comes with a message. Sid  (Sidharth Chandekar ) and Ishwar ( Hemant Dhome ) play two college boys who set out to woo their lady love, Kimaya ( Rutuja Shende). How the two youngsters try different ways to win Kimaya’s love and how one of them adheres to the internet to find solutions for his problems finally ending up frustrated is the story all about.

Sid is  known to be a big internet addict. When he falls for Kimaya , a beautiful girl in his college, he simply can’t help following her virtually. He is cool at chating but can he really approach a girl with the same confidence outside the internet? When Sid gets serious about Kimaya and decides to woo her, he takes recourse to the internet to find him the way to her heart. He comes across a website named  Lovemotions.com which promises to give him full assistance in his mission and there he is ransacking the site for fundas and methods to win Kimaya. Yes, we all consult Mr. internet at times, but Sid literally lives in it and in the end, unable to cope up with the reality, he ends up frustrated. His parents become worried and decide to find a solution. How Sid’s life takes a different turn thereafter is interesting. The only loophole in the film is it’s predictability. At certain occasions, at times there is clear lack of novelty in the treatment of the story.

When there is the backdrop of college campus, music has to be foot tapping. The music directors Nilesh, Hrishikesh and Jasraj produce just that. Siddharth Chandekar , Hemant Dhome leave no stone unturned in portraying their characters. Rutuja Shende , the new comer, as Kimaya , puts up an impressive performance. Kedar Gaikwad , the director, deserves the praise for giving a realistic treatment to the subject and characters.

Online Binline is a delightful watch for the youngsters as well as for the seniors. It might serve as an eye opener for you.