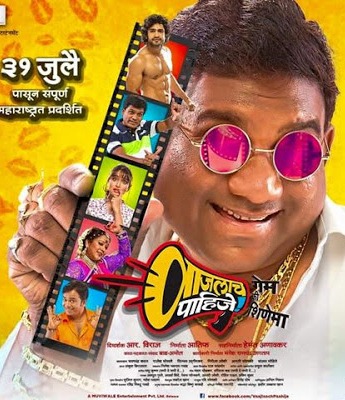 Vajlach Pahije is a movie on struggle, film and success. It has been directed by R. Viraj and produced by Atif Khan. It’s beautifully written by Parag Kulkarni with the screenplay by Bal – Amol. Bal – Amol has also written the dialogues of this film as well. It’s from the house of Channel U Entertainment Studio, with Mangesh Jagtap as the creative producer.

With this movie, a tribute is being given to the Marathi actor and producer, Dada Kondke. There are two guys Raj and Yash; one, a struggling actor and another, a struggling director. Both of them looks for a producer and comes across Bhau Damdar who agrees if and only if there’s a beautiful heroine in this film. Yash grabs the opportunity and pictures an imaginary girl to the producer upon which Bhau Damdar agrees. The next stage of the film is to find that beautiful actress. But when Raj does find the perfect girl, she turns out to be Yash’s sister.

To know what happens next, and whether these two guys ultimate make a movie in spite of so many hurdle, you will have to watch this mind-blowing thriller movie.

The music, launched by Purushottam Berde, the renowned producer – director, is already being praised for its intriguing tunes. It has four tracks and all of them have got high views in YouTube too. Director R. Viraj has done a tremendous job and it’s worth a watch. Its release date is 26th June. Do buy the tickets to have a good laugh.