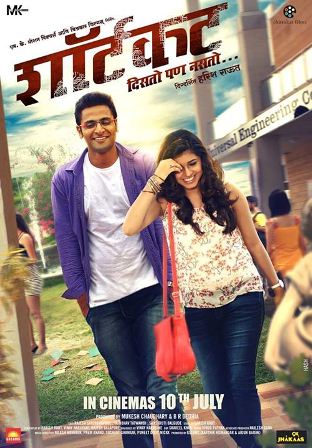 Shortcut is a Marathi film based on cyber crime, directed and scripted by debutant director Harish Raut. Coming from the production house of M K Motion Pictures & Chitrakar Films, it’s being produced by Mukesh Chaudhary and B R Dedhia. The movie stars Vaibhav Tatwawdi as the lead hero and Sanskruti Balgude as the female lead. Rajesh Shringarpure plays the role of a righteous cop who sets his eyes on Rohit (Vaibhav Tatwawdi).

The protagonist Rohit is an introvert guy who lacks a social identity but is a sheer genius with computer codes. He falls in love with Ishika (Sanskruti Balgude), a charming, young, intelligent lady with a bit of stubbornness. To impress her, he tries hacking into other systems and ultimately starts earning through it. He proposes Ishika with the entire boost up he got from hacking and Ishika too held a likewise feeling. His hacking gets caught by ACP Rajesh Nibalkar (Rajesh Shringarpure) who tracks him down through his IP. How will he catch him? Or would he even catch him? To kill the suspense, go watch this thrilling movie with a romantic touch.

The music of Shortcut is pretty unique. It has six tracks, directed by six music directors which makes it a truly ensemble music cast. Makhmali, a track from this film has become quite popular in YouTube as well, after the music launch.

Mainly shot in Mumbai, Karjat and Lonavla, this film has a storyline that will connect with today’s youth very easily. With this thrilling plot and such a fresh cast, it would be a huge loss if you miss this movie releasing on 10th of July.