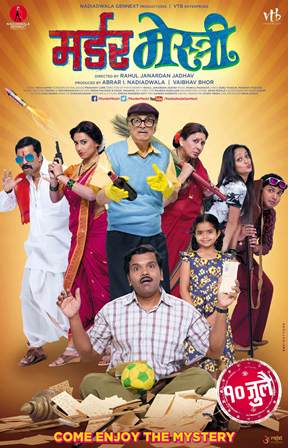 Nadiadwala Gennext Productions has gifted the audience with a number of popular Hindi movies. But this time, they are planning to take over the Marathi movie industry with Murder Mestry. Producers Abrar Nadiadwala & VTB enterprises (Vaibhav Bhor) are very much enthusiastic and eager for this movie that is directed by Rahul Jadhav. With music by Pankaj Padhgan and story written by Neha Kamat, this is a must watch movie.

The music is also very entertaining. Legendary singer Asha Bhosle, popularly known as Asha Tai has lent her golden voice for a song in this movie. She remarked that it’s a light, hummable song for all ages. Casting Asha Bhosle for his music was “a dream come” true for Pankaj Padhgan. The song titled Sanvshayacha Kida will release soon too. Guru Thakur has penned all the songs and the entire crew as well as the audience has liked his work.

The entire cast has been seen together in many places. They were spotted celebrating Gudi Padhwa and also seen at the launch of Deccan Queen. It shows that the team has bonded quite well.

This simple, suspense-comedy-thriller is all set for its release on 10th of July.