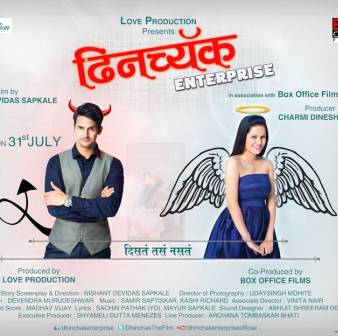 Directed by Nishant Sapkale and produced by Charmi Gala, Dhinchak Enterprise is a like fresh breath of air in the Marathi movie industry. The cinematography has been done by Udaysingh Mohite and it has lively and brilliant music pieces from the music directors Sameer Saptiskar and Kashi Richard.

Manava Naik and Bhushan Pradhan starrer Dhinchak Enterprise has a unique storyline that revolves around the marketing industry. The story has a fresh vibe and it deals with human emotions and feeling that comes into play in different aspects of a marketing industry. It has shown the dynamics of this industry with beautifully portrayed characters.

Dhinchak Enterprise had its music launch in Mumbai recently and it has been welcomed with a huge positive response. Singers like Mika Singh, Harshadeep Kaur, Papon and Adarsh Shinde have lend their voice to this movie. The music launch was quite successful and the songs have been quite popular.

The lead actors along with Aksham Kulkarni, ReshamTipnis, Munmun Dutta, who has a guest appearance have done a beautiful job. Marathi Films are known for the new and different movie plots and Dhinchak Enterprise is surely not going to disappoint you.

Following its music release, the film is all set to release on 31st of July this year. Already having created such anticipation among the viewers, the film is expecting a huge success. Be the first one to watch this marketing flick by Nishant Sapkale with your near and dear ones.