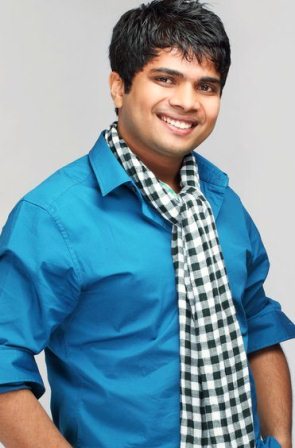 Hemant Dhome , who was earlier seen in films like Kshanbhar Vishranti, Jai Jai Maharashtra Maza, Mangalashtak One more, Aandhali Koshimbi, will be seen next in the film , Online Binline this month. Online Binline will release all over Maharashtra on 3 rd July 2015.

Married to Tv actress, Kshiti Jog, Hemant Dhome made his presence felt in the recent Marathi movies and proved his acting skills. He is one of the emerging young actors in Marathi who has set his foothold in the industry. In the year 2012, he tied the nuptial knot with Tv actress Kshitee Jog in December 2012. The two make for an adorable couple and are one of the sweetest Marathi industry couples off screen. Hemant’s charming and kiddish charm imparts a panache to his acting. Hemant brings to life even small roles with his spontaneity and impactful performance. Kshitee jog, his life partner complements his sweet looks and adorable style.

In 2010, Hemant appeared in Kshanbhar Vishranti as one of the couples the film. Kshanbhar Vishranti received warm reception as it was a touching story of young friends who stand with each other through thick and thin. In 2012, Hemant contributed as a script writer to the film Satrangi Re. the film was a multi starrer with actors like Amruta Khanvilkar , Adhinath Kothare, Pooja Sawant, Siddharth Chandekar and few others. In the same year, Hemant once again appeared in a multi starrer film, essaying a major role in the film, Jai Jai Maharashtra Maza. In 2013, he essayed a key role in Swapnil Joshi starrer film, Mangalashtak Once more. Hemant was impressive in this romantic drama that explored the nature of love and marriage. Andhali Koshimbir followed this in 2014. Hemant began to be recognized as a potential actor with this film.

In April 2015, Hemant was seen in Kay Raav Tumhi which deal with the ills of society in humorous way. Besides acting, Hemant is passionate about fitness and health. The young actor believes in living life to the fullest. Whenever, he takes time off from his work, he spends the time with wife, Kshitee.

Hemant awaits the releasing of Online Binline on 3rd July 2015. In Online Binline, Hemant shares the screen space with Siddharth Chandekar and new comer Rutuja Shinde. Online Binline deals with the subject of internet addiction of the young generation. It is an interesting take on the present scenario where everything is digital.