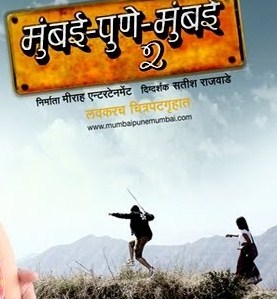 Mumbai Pune Mumbai 2 is a romantic film directed by Satish Rajwade and shot in the studios of Mumbai Film Company. Lead actors casted in this film are Swapnil Joshi and Mukta Barve. They have sizzled the screen previously in many movies as well as television serials like “Eka Lagnachee Dusaree Gosht”. Their teaming up for the sequel has been warmly welcomed by the audience and the film is expected to be a huge success.

Both Mukta Barve and Swapnil Joshi are from Mumbai and the story revolves around the life of these two characters. In this sequel, they are supposed to get married which is evident from the Marathi tagline in the film, “Lagnala Yayachach haa”. The whole marriage thing has given it a very fun and interesting aspect. Producer Amit Bhanushali has commented that the story was so intricate and beautiful that it deserved a sequel.
The sequel has got beautiful tracks by composers Avinash – Vishwajeet. Swapnil Bandodkar and Bela Shende have sung the songs penned by Spruha Joshi.  ‘Zaad Hi Preethi Shi’, a duet and ‘Saath De Tu Mala’, a solo; which has already received a large number of views on YouTube. The music has uplifting party tracks along with romantic numbers.

The entire production and cast have tried to retain the original flavour of the movie that was widely accepted by its viewers. This Diwali, be sure to get entertained as this movie is hitting the screens on 12th November, 2015.