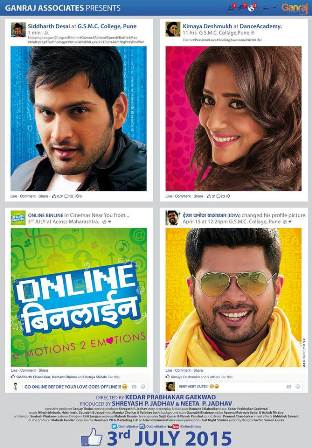 Director Kedar Prabhakar Gaekwad, who also happens to be an extremely talented cinematographer is ready with his next Marathi movie. The movie is produced by Shreyash P. Jadhav and Neeta P. Jadhav under the banner of Ganraj Associates. The movie stars actors like Siddharth Chandekar, Hemant Dhome, Prasad Kamat, Pournima Manohar. This movie is also the gorgeous Rituja Shinde’s who has acted previously in theatres and short films also debut movie.

Online Binline is a light romcom movie and any youth can identify with this quirky movie as it has been inspired from them. It is based upon how today’s youth are addicted with the Internet. The Internet seems to be the key to anything and everything for today’s youth. The story as well as the screenplay has been given by Hemant Edlabadkar. He has also given the dialogues of this movie. Online Binline has Nilesh Moharir, Hrishikesh, Saurabh and Jasraj as the Music DirectorsPriyanka Barve, Hrishikesh Ranade, Prasanjeet Kosambi and Jasraj Joshi have sung for this movie. The famous Sonu Nigam has also lended his soulful voice for a slow number for Online Binline. The song has been shot in slow motion, much like Pehla Nasha from Qayamat Se Qayamat Tak. The music album consists of various peppy numbers. There is also a remake of the famous pop song ‘Oh Ho Kay Zhala’ which featured Leslie Lewis and Hari Haran.

The movie is stated to release on 3rd of July. Be sure to catch up this movie with your friends and have a great time.