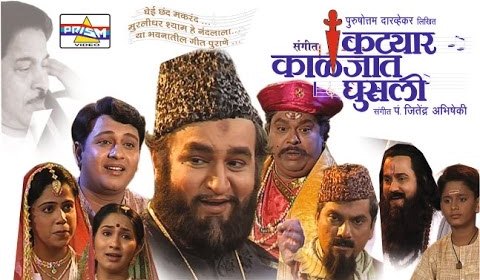 The very famous Marathi musical play Katyar Kaljat Ghusali is being remade as a movie for the Marathi audience. It is considered to be an immortal plays and is a milestone in the history of Marathi theatre. It was premiered first in 1967 at Mumbai.

Katyar Kaljat Ghusali would be a treat for the Marathi movie lovers and of course the ones who love Marathi Sangeet Natak. The actors playing the lead characters in the movie will be played by Rahul Deshpande and the very talented Subodh Bhave, and Mrunmayee Deshpande are also a part of the star cast of the movie. The very versatile Shankar Mahadevan and Rahul Deshpande have lent their voices for the playback of Katyar Kaljat Ghusali. Rahul Deshpande, a well known classical singer happens to be the grandson of Pt. Vasantrao Deshpande will be playing the protagonist Khansaab.

The storyline is based on the story of two musicians, belonging to different gharanas, each a veteran in his own field. The twist in the plot of this simple story is the fact that one is a Hindu pandit and the other a Muslim. Their respect for each other and the comparisons in their musical style and approach makes this story a beautiful one. Even though it was initially premiered 58 years back, Katyar Kaljat Ghusali continues to remain in the hearts of Marathi audience.

The movie is stated to be released on 13th of November, 2015. Mark your calendars to watch this movie for an enriching experience.