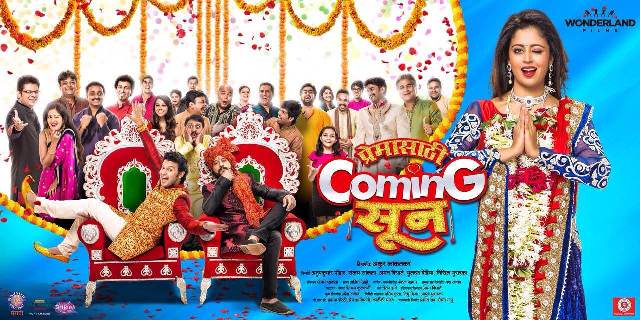 In Ankur Kakatkar’s upcoming film Premasathi Coming Suun, Neha Pendse and Adinath Kothare are playing a lovey dovey couple. Neha and Adinath who have been friends for really long time , have been paired in this romantic comedy. The film is a hardcore romance and a love triangle. Jitendra Joshi, the other actor is also playing another man in Neha’s life in the film.

The film has got many romantic scenes involving Neha and Adinath. The actors were reportedly very comfortable with each other during the shooting of the love scenes. Neha was quoted saying that she shares a very sweet relationship with Adinath and so she felt totally at ease shooting those scenes. Neha dons a new avatar in the film in a slender look. Her styling for the movie is refreshing. The actress lost almost 10 kgs for the role which required her to be sexy and bold. Now with the new look, her pairing with Jitendra Joshi and Adinath looks even more attractive.

Adinath who is married to actress Urmila Kanetkar was recently seen as Sulagna Panigrahi’s love interest in Ishqwala Love. Seems like the good looking actor is the new love boy in the tinsel town. Lets see how his paring with good friend Neha turns out.

Pallavi Subhash and Aniket Vishwasrao are Broke Up