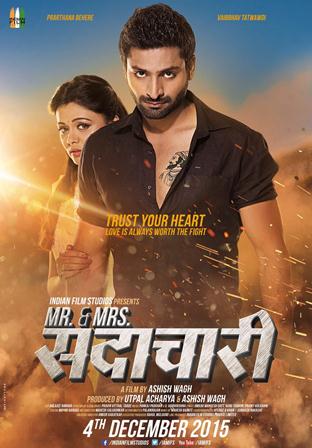 Ashish Wagh is a known name in film distribution world who has distributed more than 300 films. However, after trying his destiny in film distribution, he is now seen trying his luck in the role of a director and producer of his forthcoming Marathi film called Mr. & Mrs. Sadachari. After embarking with its poster that went viral over the social media sites, the film enjoys a decent buzz in the media amongst its audience. It is Prarthana Behere, Vijay Andalkar, Mohan Joshi, Uday Nene, Uma Sardeshmukh, Prasad Jawde and Sumukhi Pendse in the lead roles.

After giving the successful film like Coffee Aani Barach Khai, the leading pair of Marathi Cinema- Vaibhav Tatvavdi and Prarthana Behere will be seen once again, however, as per the director their roles would be completely different than notice in the previous films. Hence it would be an image makeover kind of thing for the two who share smashing chemistry with the two. The film has been shot in a number of places including Kolhapur to get the traditional look and feel, while for adding some contemporary and natural look; the director has gone all the way to Mauritius to catch the picturesque locations of this place for the film. The music comes from Pankau Padghan and Lyrics comes from Omkar Mangesh Datt, while the dialogues have been given by Pravin Vitthal Tarde.