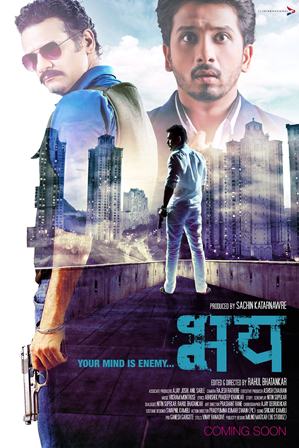 Fear is a subject that has intrigued filmmakers a good deal and many films have been made on the subject with some being major successes. But there are very few movies that address fear in terms of a mental illness. Most of them revolve around horror and ghosts. Nevertheless, Bhay is different. It is one of those rare movies that explore fear and its impact on the mental health of people through a gripping plot where you will be thrilled and moved in equal measure.

Directed by Rahul Bhatankar, the movie tells the story of paranoid schizophrenia- a kind of fear psychosis in which an individual faces illusions of persecution and grandeur. The patient withdraws from society and hesitates to mix with people. This leads to many ill effects for him and also influences his family in a negative way. But there is a way out and with proper care and efforts; the patient can get rid of the ailment and lead a normal life. The motive of the director is to spread this message to the people and he does so in a manner that is neither didactic nor boring. Here is a psycho-thriller revolving around paranoid schizophrenia that will entertain you thoroughly and you will come back moved and thrilled.

The movie has been extensively shot in Mumbai and Dubai. Abhijeet Khandekar, Uday Tikekar, Satish Rajwade, Smita Gondkar, Vineet Sharma and Sanskruti Balgude comprise the star cast, the lyrics have been written by Pratap Khankar and it is produced by Sachin Katarnavare.