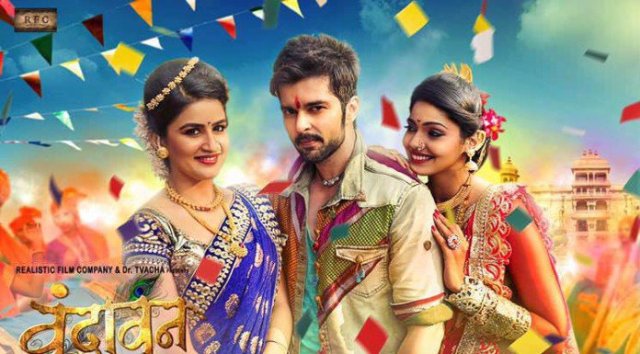 This Friday we have two movie releases in M Town, which certainly include the much hyped and awaited film called Vrundavan. The film is directed by TLV Prasad, while produced by Raj Preme and others under the banner of Realistic Film Company in associations with Dr. Tvacha. The film has a slew of actors in the lead and supporting roles including Rakesh Bapat, Pooja Sawant, Mahesh Manjrekar, Vaidehi Parshurami, Ashok Saraf, Sharad Ponkshe, Mohan Joshi, Uday Tikekar, Aarti Solanki, Bharat Ganeshpure and Kumar Hedge in it. The music is given by Amit Raj, while the photography is carried out by B Vasudeva Rao. Now, let’s dig in deep into the film to get the crux of the same as under:

Vrundavan is an overloaded star film with a cute love story at the center witnessed between Krissh and Pooja played by Ragesh Bapat and Pooja Sawant respectively. Amidst their love story which is all set to settle down comes a twist when Pooja asks her boyfriend to help her best friend called Bhumi who has a joint family to act as the boyfriend of Bhumi just to avoid arranged marriage set by her wealthy father with a local goon called Vishwajeet played by Kumar Hedge. He agrees to this favor, which comes as a big challenge for him uniting the family of Bhumi and managing the village goon as well.

The current trend in Marathi Cinema seems to be chancing for having out of box themes, however, some of the M Town filmmakers are more influenced by B Town and South Indian films for the action film released and Vrunavan is a classic example to these kinds of movies. In the film you can find too many fight sequences apart from having loads of songs in it. Some of them appear to have added forcibly with unwanted humor in it hampering the entertainment value of the film.

Now talking about the start performances, RaqeshBapatwhile playing anew action hero of Marathi film was seen some good stunts in the film with a decent acting performance in the movie. However, it is the actress Vaidehi Parshurami, who is seen hot and cool look in the film giving a captivating performance. And talking abot the supporting roles played by actors like Ashok Saraf, Mohan Joshi, Mahesh Manjrekar and SharadPonkshe have tried to give their best of the performances through whatever they have found in their share. Lastly the role of Bharat Ganeshpure has been crafted so well in his small screen presence.

Direction, Music and Other Technical Elements

The plus point of this movie is its direction and music. The song called Govinda is a duet that is filmed over Raqesh and Videhi seems to be doing better over the chartbuster, while the direction of photography carried out by B Vasudeva Rao seems very much decent. The other elements like editing and other elements like screenplay and other departments have been decent over the silver screen. In a sense these have tried to add entertaining value in the said film.

The film though seems to have an ordinary plot but considering the dramatic twist in the climax make the movie interesting. Though one can find the film treading the path laid by B Town and South Indian films, it fails to have the Marathi flavor though manages to offer a decent amount of entertainment. In other words, technically the film is okay in terms of results and action.