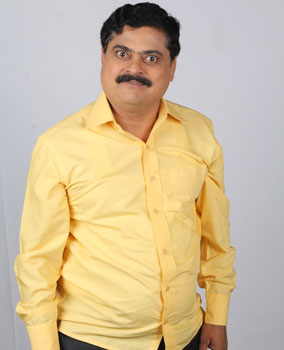 Bharat Ganeshpure is a popular M Town actor who is born and brought up Dariyapur in District Amravati. He is born on 15th August 1969 in the said place wherein he got his primary education followed by college in Amravati. He studied BSc in Agriculture from the known Shri Shivaji Agriculture College from Amravati. His love and interest in acting led him to head to Mumbai wherein he tried his luck in M Town to get good break in small screen and Marathi cinema. Now, let’s dig in deep in this life and get the crux of the same as under:

He started his career in acting with small screen doing the TV series like Fu Bai Fu and Chala Hawa Yeu Dya and soon he got the chance to work in a Hindi film called Tamboo Mein Bamboo in 2001 followed by Marathi film Saatchya AatGharat in 2004 and another M Town film known as Sakhkha Savatra. The initial days remained a bit struggling however, once he started getting work in 2008, it was no looking back from him. Some of his initial films in M Town include EkDaav Dhobi Pachhad, Checkmate, Kon Aahe Re Tikade, Tata Birla AniLaila and Debu to name a few.

Some of his recent Marathi films include Swami Public Ltd, Dr. Prakash Amte- The Real Hero, Bhakar khadi 7 km, Poshter Boyz and Ek Daar Bhangadi Faar to name a few. Though his interest lies on comedies, however, he has acted in a number of movies in characters of negative shade; his character of corrupt police officer in Prakash vata has been lauded by one and all. As per as her personal life is concerned, he is married and has a son based in Mumbai only.